Protected Extensible Authentication Protocol (PEAP) is often regarded as a secure 802.11 wireless authentication protocol. Whilst PEAP has the ability to become a secure protocol it is certainly not without its deficiencies. I thought I would take this opportunity to provide everyone with an overview of the PEAP protocol by examining what it is, how it works, where its shortcomings lie, and how to secure it.

Before we dive into the security concerns surrounding PEAP it is important to know there are currently three versions of the PEAP standard. The version I will be referencing throughout the remainder of this post will be PEAPv0. This is the most common deployment of the PEAP standard.

PEAP is a widely deployed Extensible Authentication Protocol (EAP) type used to securely authenticate users against 802.11 wireless networks. Developed by Microsoft, Cisco and RSA, PEAP has been made popular through its continued support by the Microsoft Windows platform. PEAP has the ability to support a range of inner-authentication methods, most notably Microsoft’s challenge-handshake authentication protocol known as MS-CHAPv2. 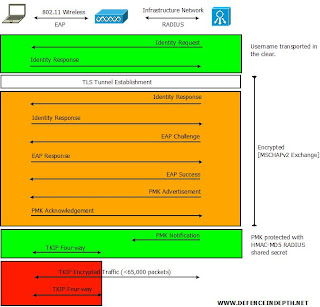 There are three main attacks which can be used against the PEAP protocol:

The PEAP authentication attack is a primitive means of gaining unauthorized access to PEAP networks. By sniffing usernames from the initial (unprotected) PEAP identity exchange an attacker can attempt to authenticate to the target network by ‘guessing’ user passwords. This attack is often ineffective as the authenticator will silently ignores bad login attempts ensuring a several second delay exists between login attempts. Whilst a lockout policy will also defend against this type of attack, failed login attempts could trigger a denial of service (DoS) attack on the network.

The key distribution attack exploits a weakness in the RADIUS protocol. Whilst this attack is not specific to PEAP deployments, it is often regarded as the weakest point in an 802.11 PEAP/WPA infrastructure.

The key distribution attack relies on an attacker capturing the PMK transmission between the RADIUS server and the AP. As the PMK is transmitted outside of the TLS tunnel, its protection is solely reliant on the RADIUS server’s HMAC-MD5 hashing algorithm. Should an attacker be able to leverage a man-in-the-middle attack between the AP and RADIUS sever, a brute-force attempt could be made to crack the RADIUS shared secret. This would ultimately provide the attacker with access to the PMK – allowing full decryption of all traffic between the AP and supplicant.

The RADIUS impersonation attack relies on users being left with the decision to trust or reject certificates from the authenticator. Attackers can exploit this deployment weakness by impersonating the target network’s AP service set identifier (SSID) and RADIUS server. Once both the RADIUS server and AP have been impersonated the attacker can issue a ‘fake’ certificate to the authenticating user. After the certificate has been accepted by the user the client will proceed to authenticate via the inner authentication mechanism. This allows the attacker to capture the MSCHAPv2 challenge/response and attempt to crack it offline.

In order to secure PEAP deployments from RADIUS impersonation and authentication attacks the following client-side configurations should be deployed: 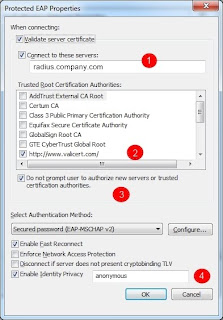 The Microsoft Windows platform uses a myriad of protocols to authenticate users across a network. Two such protocols widely in use today are the LANMAN challenge/response and NTLMv1 protocols. Whilst newer, more secure protocols (such as NTLMv2) are ready to take their place, LANMAN challenge/response and NTLMv1 are still widely deployed today for reasons of interoperability. As with most things Microsoft-related, ubiquity often equates to exploitability.

In this two part series I will discuss how the LANMAN challenge/response and NTLMv1 protocols operate, how malicious users can take advantage of their shortcomings, and best practice recommendations for securely deploying these protocols.

Enabled by default in Windows NT, 2000, XP, and Server 2003, the LM Hash has become synonymous with bad hashing practices over the years. Used for backward compatibility, this older hashing method has several inherit flaws, making it trivial for attackers to crack LM Hashes within minutes.

The second, more secure, hashing algorithm generates what’s known as an NT Hash. Exclusively on by default in Windows Vista, 7, and Server 2008, this hash is generated using the MD4 hashing algorithm.
Note: By default, Windows XP stores both the LM Hash and the NT Hash.

Before we begin looking at the Microsoft network authentication protocols, it is important to note that LANMAN challenge/response and NTLMv1 are the same protocol except for one key difference: LANMAN challenge/response utilises the locally stored “LM Hash” whilst NTLMv1 uses the locally stored “NT Hash”. Aside from this, the protocols (for all intensive purposes) operate exactly the same way.

The Client’s response is made up of the following steps:
Now, at first glance this protocol seems fairly sensible. But you may have noticed something in Step 1 of the Client’s response. If the hash (LM or NT) is 16-bytes long, how do we break it up into three 7-byte portions? i.e. 7 does not divide into 16 evenly.

To combat this unevenness, the LANMAN and NTLMv1 algorithms pad the third key with 5 nulls. By doing this, we now have three evenly portioned keys.

So, the response process in its entirety looks something like this: 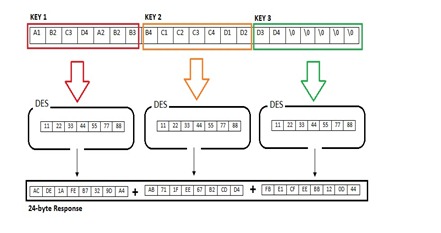 blackhat networks is a group founded in Adelaide, with members also in Perth and Sydney. The group was named such by an anonymous complaint filed to our friends at wiLANga. Our interests are in augumented reality, databases, education, game modification, hardware design and modification, network design, photography, security, software development, video production and community technology-based events.